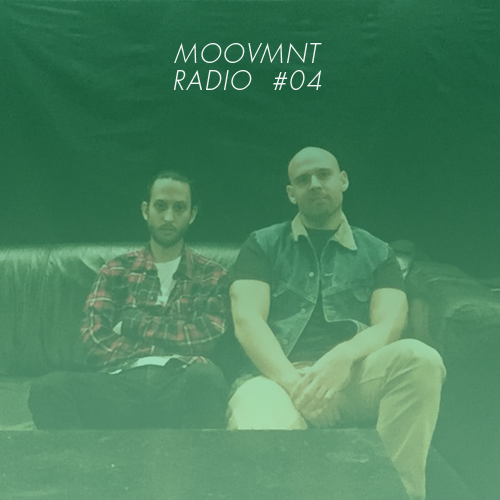 So here’s the fourth installment of Moovmnt Radio show number four recorded recorded at Studio 80 Radio in Amsterdam. Unfortunately our dear friend B. Bravo is flying in today otherwise we would’ve had him on our show as special guest. This time it was just Deluge and me.

Please kick back and enjoy two hours of the best in contemporary soulfelt music. We hope you’ll have as much fun listening to this as we had recording it. See you guys May30th between 5 and 7pm (GMT+1). Any form of support is highly appreciated. Don’t be scared to repost, like or comment and find the tracklist after the jump.

Moovmnt Radio 04 by Moovmnt on Mixcloud

END_OF_DOCUMENT_TOKEN_TO_BE_REPLACED

It’s no secret I fall in love with female vocalists on a regular basis. Nai Palm, Alex Isley, Alina Baraz and a lot more. Recently I fell back in love with Ruby Wood of Submotion Orchestra.

She thought today was the perfect day to share a little something something to celebrate the sunny weather. The track “Off My Mind” was produced by Niall Lavelle and written by Ruby Wood. One of the gems that made me fall in love with her amazing voice was “2L84U” of Submotion Orchestra’s ‘Alium’ album. It was released last year on Ninja Tune and In case you weren’t a fan yet, we suggest you head over to Ruby Wood’s Soundcloud page and check this beautiful lady out.

Oh if you hurry, you can snag a limited free download here.

This time around we unfortunately only got to spend 1 day in the Red Bull Studios Amsterdam for our monthly ‘Werk Space‘ project with Jengi Beats. The young producer from Den Bosch turned 19 in January and is well on his way to becoming one of our national export products. You might know Jengi Beats, because of his affiliation with ZenSupremacy, Youtellme or Bitbird. Or perhaps you’ve heard his remix of El. Train’s “Control” featuring miss Miki Rose.

Anyway sir Jengi Beats worked on a little track called “Sun Sun” during his Werk Space visit to the Red Bull Studios Amsterdam. It will be unleashed into the world next week, so sit tight.

Alina Baraz & Galimatias “Can I”

According to miss Alina Baraz there is a universe inside of you and I bet deep within grows an abundance of urban flora.

Together with Danish super producer Galimatias the songstress from Ohio manages to captivate us once again. Ever since KING released their first EP, I’ve been slowly starting to believe in fairytales again. The tiniest things these pocket size miracles, but once you are able to witness them again they make life so more more intens. The latest song from Alina Baraz & Galimatias, entitled “Can I“, is another great example of such wonder.

Like I said before, these two are a match made in heaven and I’m dying for their “Urban Flora” EP to come out.

Evil Needle “Reminisce” out on HW&W

To most it is no surprise that the French producer we know as Evil Needle is heavily influenced by nineties Hip-Hop music.

He is known for his crystal-clear, luminous sounds which most praise him highly for. On his latest album, entitled “Reminisce“, he delivers what you’d expect. Titty tight beats, sounding crispy as f*ck. Some might say it’s the usual recipe, but I’m still snacking away on all 11 songs myself at the moment.

I remember Evil Needle telling me he started messing around with making his drums sound live. Over the years it seems he has mastered this quite well as you can hear on tracks such as “Lullaby”. One of the reasons I still love this sound, is because I’m a sucker for downtempo melodic joints that gently brush the ear. “Sunday Morning” is the perfect example and like we say…shit is simply vibin’.

Reminisce marks his 3rd release with HW&W following “Equilibrium” & “Qualia” and only features JSMN on vocals. It’s big, it’s bad and it’s well worth it, so pick up a digital copy right here.

Hussein Ibn Faraji has been working long and hard on the Faraji Heritage Experiment master debut album entitled “Nafsi“. It is finally out and is a true work of art which fuses multiple genres such as Jazz, Soul, Electronica and for this reason I decided to call this project Jazz Fusion.

The “A/R/T” experiment blew us away back in 2012 and now we get further blown to bits by an incredible new album from the Moroccan composer. I rarely have a hard time choosing the best songs, but this time around the entire project was so divers that it was hard for me to pick. Really love tracks like “Indecision”, “Love & Compromise” and “Ode To Wattstax” (which we premiered a little over a week ago).

Like we said before Nafsi means soul or being in Swahili and trust me this album gets to your soul. Very happy Cosmonostro is putting this out and we hope that one day this can be pressed on vinyl, for it deserves to be available on black gold. Please support good music and purchase Nafsi right here.

A very good friend of mine who goes by the name of B. Bravo has been collecting some records for me over the past years. So one day I bought one of my favorite Billy Ocean albums on Ebay for a bargain and told him it was a small gift from me to him. Little did I know that he would one day grab his talkbox and create his very own version of “Nights” (Feel Like Getting Down)”.

Another fun little fact is that I was selling some of my doubles last year at a small record fair and this one guy pulled out a 12″ version of Nights. He looked as his friend and asked him…’is this that one song’? I immediately started singing the hook and he was like ‘oh snap, I’ve been looking for this for a while now’. He was hella happy that day.

To celebrate the fact that B. Bravo is touching down in Europe in this week, he decided to unleash a brand new Funk track on his Soundcloud page. It was premiered by Discobelle and is available for free download right here! We’ll be taking Mr. Bravo to the Red Bull Studios Amsterdam next week to create something funky, so you can expect more good music to come your way soon. Make sure you catch one these nights in Stockholm, Tallinn, Trondheim or Amsterdam in the next two weeks, so you can see B. Bravo get down and dirty in the flesh.

A couple of months ago this mysterious track called “Sunshine” was released by Eclectic Blue. I thought to myself is this the name of a band, a person or a project? Since there was so little info, I kinda forgot about this track.

Fast-forward to now, we know that this soulful piece of good music was written by Jae London. Lee Hogans was responsible for the laidback production and LOVEchild Chris Turner from New York is the responsible for the vocal arrangements and voice. I really love the incredible ‘Saadiq-esque’ delivery and got a super exclusive new track of this project in my inbox yesterday. Seem like ‘The Moment’ to write a little piece on the site.

Now an album is scheduled to release this Summer, but it might take a little longer to drop. Definitely this year though! To clear things up Jae London and Chris Turner are Eclectic Blue. Their first single is up for grabs on iTunes and I suggest you keep your ears out for the album.

The Netherlands might be considered a small country with few inhabitants, but when it comes to electronic music it’s a breeding ground for young talent.

In January 2015 Moovmnt birthed the project known as ‘Werk Space‘. We were playing with the idea to put together a bunch of different producers on a compilation. However this was not exciting enough, so we decided to work out the idea and approached the Red Bull Studios Amsterdam.

Each month we invite a producer from the Netherlands to showcase his artistry and challenges him to work in an amazingly fruitful environment. In addition fellow musicians, vocalists and instrumentalists are invited. By doing so collaborations, that otherwise would have never been initiated, are conceived.

The first three tracks from Singularis, Moods and AJ Beats are now available for free download, so grab the Werk Space EP1 right here! We’ve had help from a few incredible artists, without whom the Werk Space project would have never been possible. Our sincerest thanks go out to:

Been finding a lot of Soul music this week and of course that’s what Moovmnt has always been about. Music with a Soul element!

Toronto-based soul singer Allie is far from ordinary…this is one thing that is for sure. She’s collaborated with producers such as Elaquent and Sweater Beats and is well on her way to greatness. During the Red Bull Music Academy Bass Camp in Montreal, she recorded a wonderful new song entitled “Remedy” together with Nick Wisdom (1/2 of Potatohead People).

There’s been word of an EP coming out, but no info is available at this point. We at Moovmnt are definitely looking forward to hearing more music from Allie, but for now enjoy this free download.