Portugese producer Raez proved his ability to flip soul samples and turn them into laid back Hip-Hop grooves on his submissions for the Roy Ayers Project compilation.

Everything started during his teenage years. He grew up listening to Rap and R&B and it wasn’t for long that he decided to start producing and collaborating with other artists across Portugal. In 2013 the Oporto-based beatsmith released his full-length “Connecting Miles” album on Cosmonostro. Some time has passed and Raez has collaborated with artists from five different continents.

One of the most current collaborations is the track “In This Life” which was remixed by Neguim Beats from Brazil. Pleasure to premiere this dope joint of Raez’s forthcoming “Remixing Miles” on Cosmonostro. April 13th…ya dig?!

I don’t think there is much more to be said about the brotha Evil Needle really. We have been writing about one of the best beatmakers in the game for a very long time and at some point words are no longer necessary.

Evil Needle’s latest track “Past & Present” is the first cut of his forthcoming “Reminisce” project. It’s due to drop April 21th on HW&W and will no doubt be the shiznit!

He started creating music a year and a half ago under the name Mozzdeep and sees Hudson Mohawke and Rustie as two of his major influences. We hear an interesting fusion of genres and it seems Mozzdeep picks out certain elements in order to create this powerful signature future vibe. Take the track “Harpy” for instance, on which he starts off with some Housey vibe, only to switch it up and get all Hip-Hop on our ass.

Mozzdeep’s track record is not extensive, but he’s released one track with Laruche and another one with Mellow Orange in the past. Get ready for his forthcoming “No Qualms” EP out April 5th on Laruche Records.

Masego is a modern day one man band. He fuses the styles of Trap, Electronic and Jazz to create a unique sound. He utilizes looping to create on the fly grooves which tend to create lasting impressions on whoever’s in the crowd. He combines Djing with his live instrumentation in a way you’ve never experienced. He is the leader of the Trap House Jazz Band full of the world’s best musicians and creatives. Read through our interview, he’s an incredibly passionate and well spoken dude.

END_OF_DOCUMENT_TOKEN_TO_BE_REPLACED 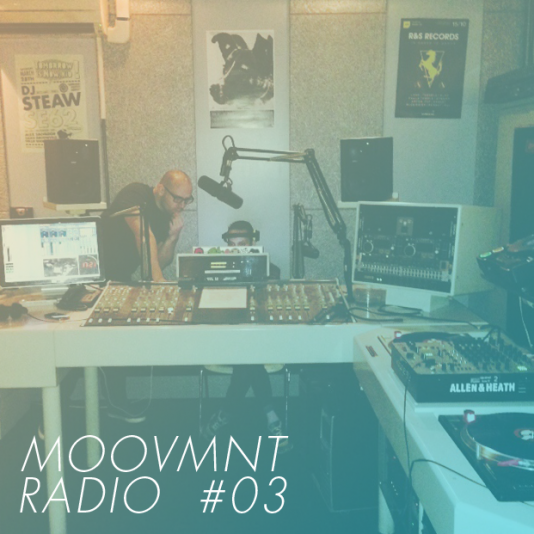 Yesterday we had a blast recording Moovmnt Radio show #3 at Studio 80 Radio on my birthday. I turned 35 and invited Darker Than Wax representative LA-NO to join us in the studio to drop a little set.

Yes I pre-recorded this one at home, because I know I was not going to be able to make any sense. LA-NO’s party (Pop Ya Collar) was off the hook and hit the bottle hard. It gave us a chance to have some heartfelt conversations and even the homies Blue and Michiel from Shourai stopped by. Big up the Deluge, Sherisa and lil’ Seji for coming through and being true friends.

We played some exclusive cuts from Dizz1, Jordan Rakei and Tetsuro Fujimoto and lots more incredible new music. This show was basically about hanging out, talking music and having fun. Forgive us for not delivering the usual witty comments, you might have grown accustomed to. We promise to guide you through our next musical journey in April. Hope you’ll have as much fun listening to this as we had recording it.

Moovmnt Radio 03 by Moovmnt on Mixcloud

DrewsThatDude is a multi-platinum, Grammy nominated, producer. He’s probably also one of the realest guys you’ll ever meet. I recently had the chance to catch up with him. We talked about the tweet heard round the world, his first recording related job, major influences and a hell of a lot more. Lifetime’s about to write a screenplay to this interview. Check it below:

END_OF_DOCUMENT_TOKEN_TO_BE_REPLACED

Pacific Shore “No Distance Between Us”

Pacific Shore is an audiovisual enterprise from Stanley Bloom and Mike Ro Wave. Born in 2012 after a Californian road trip, the Parisian duo released their self-titled album. We supported them since day one, so when their second “Beyond The Mist” album dropped last year, we were more than happy to premiere the track “Street Confusion“. Their sophomore album and short film tells a modern epic tale. Set on the enchanting island of Madeira, through the eyes and voice of Sarah Linhares.

Fast Forward to the present day, it is almost time for Pacific Shore to release their third EP entitled “No Distance Between Us“. Once more their soulful jazzy sound finds a good home on French imprint Cosmonostro and sees it’s release April 6th. Again it’s an honor for us to premiere the title track of this release and we urge you to place your pre-orders now.

As our ‘Werk Space’ adventures unfold, we are having more and more fun every time. Now peep 22-year-old AJ Beats, who represents the city Enschede.

AJ came down from to the Red Bull Studios Amsterdam to work on a serious Funk banger. He started out about 4 years ago producing Hip-Hop beats, but surely evolved his sound more towards Funk-laced beats. This guy is no stranger to drumming. AJ Beats used to have a drum set with 2 snare drums in his room and you hear that in the way he programs his drums.

Under the radar Gerson Rafael from Rotterdam came through to lace some silky vocals. The track remains untitled for now, but will become available on the Red Bull Studios Soundcloud page next week.

Let us give you the update on JR & PH7. The German production duo, known for their hard knocking boom bap Hip-Hop beats, join forces with Sacramento emcee Chuuwee. The collaborative album “The South Sac Mack” is the result.

The album is clearly dedicated to the 916 and a handful of tracks are even named after neighborhoods throughout Sactown. Chuuwee gives the listener a first-person narrative and makes you experience the capital city of California in a way you might have never imagined. On the production side JR & PH7 keep it really sunny and fresh by using lots of 70’s and 80’s samples.

Clearly the collaboration between these guy was very organic and this one particular track featuring Blu stood out immediately. So I think it’s only right we add “DueYuu” to this post and tell you to head over to iTunes to check out the rest.

It’s hard to ignore a force of nature like Flako. For many years the German Chilean, who now resides in London, has amazed us with genre transcending stuff. On his latest “Natureboy” album, which released earlier today, he stuns us once more.

Such intriguing sounds, mesmorizing harmonies and collaborational partners such as Miguel Atwood-Ferguson and his alter ego Dirg Gerner. With each music project it seems Flako grows and develops himself so much, maturing into an inhuman being perhaps. He no longer makes music, he has become a storyteller of magical tales from the the beyond.

On our last radio show we played “The Odd Beautiful”, but there are so many gems on Natureboy really. Honorable mentions go to “Spice Melange”, “Twelve O’Clock Shadow”, “Lyrebird” and “With Me Now”. You’d be a fool not to get this album, but just for those in doubt…get this on iTunes now!